I wrote this at the end of September but have only just got around to taking the photos.

At the beginning of the year we decided to get rid of the bed in the spare bed room, (thank you Sue Ryder for coming to pick it up) and get a sofa bed to replace it, with the idea that it would make it easy to set up when we have guests. While we were walking round Ikea (for the bits for my cutting table) we found some sofa beds, after a quick facetime to Simons Mum to check she would be able to get off it we decided which one to get.

So on our week off in September we decided to order it, only to discover that it couldn’t be ordered on line and we would have to go into store even though we wanted it delivered. So a trip to Ikea was planned, there were a few other bits we wanted, a couple of mirrors that also wouldn’t fit in the car and we needed some storage boxes for the bedroom.

I have never been to Ikea and them have every single thing that I wanted and this trip was no different. In this case they had plenty of the bed frames (probably over 20) and the mattresses (two sizes) but no covers, surely you should have enough covers for the frames, and at £60 each you wouldn’t have thought too many people would buy one in each colour. Also where is the forward planning on the part of the stock system? they were getting more in, just not until the end of November.

That’s my complaining done, while we were umming and urring in front of the mattress isle (with four cats we really didn’t want to leave the mattress uncovered) I suggested that if we went back and took some measurements I could probably make a cover for it, even if it wasn’t as padded and snazzy as the bought one 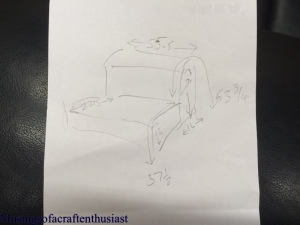 here are the measurements and the nice little diagram I made.

I used some fabric I bought early on in my stash acquisition, I didn’t quite realise what it was, the listing said “blazer fabric” so I thought trousers, skirts, it must have been really cheap I must have bought 10 meters of the stuff, it is horrible, it is heavy and it doesn’t hold a crease, however it is perfect to make a sofa bed cover.

Luckily I remembered to add the seam allowance to my measurements and all in all it took about two hours, I think there is already a catch in the fabric but at least it isn’t on the mattress. and I managed to get rid of roughly 3 meters of fabric.