Denise and I met up at my place, Simon being in Telford, the cats always take an interest in Denise’s bag, at least this week they didn’t try to fill it up by pushing things off the counter and window ledge.

Denise hung up her dress and here is the promised photo of the yoke….

This week we are starting on the sleeves, after checking the marks and the book several times we put in our rows of gathering stitches…….

Stitched up the underarm seam

Made the sleeve cuff and stitched it to the sleeve and ironed it all in place.

This is where my problems started, I stitched my sleeve in place, it went in first time which is always a bonus. I took the pins out and turned it the right way round, urk!!! There are loads of gathers across the front of the seam, I’m thinking this can’t be right! I checked the pattern pieces both the traced ones and the pattern sheet, then I double checked the markings on my fabric and the instructions in the book, everything is right, so I check Gerties picture in the front of the book no, the front of the sleeve is smooth, the top of the sleeve is nicely puffy. So in desperation I type ‘Gerties Shirtwaist dress’ into Google images, looking through the images there are an array of puffy sleeves with rather a lot of gathers across the front, looking (as Denise said) much like the cast of Oklahoma.

I’ve put my other sleeve in, not only do I not like the puffy sleeve look, the sleeve which was alright to put on when it wasn’t attached to the dress, is totally impossible to get out of on my own when stitched into the arm hole.

After Denise had prised me out of my dress, I undid all the work done that evening and am about to go back to the drawing board.

Here is a couple of photos of Denise’s dress, she also has the gathers on the front, but they aren’t quite as puffy as mine and she can also get in and out her dress without needing help.

so long for now

As you saw on the previous post we had planned to sew up the side seams before Denise and I met again (which would be next week)as I am notorious for leaving things to the last minute Last night I thought I would get a drop on it, it is a good thing I did…..

I stitched across the shoulder seams, but when I got to the side seams the pockets didn’t line up, well if i went from the bottom up the pockets lined up but there was about a two inch excess on one side of the bodice. I remembered that fact that my pleats didn’t add up and thought I had better check the front skirt and bodice patterns.
I checked and there was something wrong, not entirely my fault, but maybe if I had been paying attention it wouldn’t have happened. I traced the pattern 4-6-4 4 on the bust 6 waist and back to a 4 for the hips, if you look at these two photos, the markings for the size 6 on the skirt pattern are wrong, it is marked up with the size 8.

I’ve gone looking for dashes I’ve used the 12 line graded back to 4 (it was late, I was tired) so not only is is the piece too wide it is also too short.
Luckily I like my skirts long so I had already lengthened it by three inches when I cut it out, which means that I can still use my fabric, I just now have to shorten the back piece, and hope I like the length any way.

Today is the anniversary of my first post, which makes my Blog one year old today, to be honest I thought I would lose interest somewhere about June last year. I’m still here, I might not have blogged as much as I meant to but I have definitely blogged more than I thought I would.

To celebrate I’ve revamped the front page with a new header and colour scheme, in the next year I hope to get more to grips with the photo side of things, get more sewing actually finished and more regular posting….

I have a Pocket Dragon for all occasions 🙂

Hi, It has taken me a little while to get the photos sorted out for this post, out Sewalong actually happened on Tuesday and it is now Friday, life gets in the way.

I arrived at Denise’s at about 8PM, slightly later than I anticipated but in plenty of time to get loads done (We thought)We both started off by putting in the line for the first row of stitching, I used my water soluble pen, Denise used chalk…

my pen is turquoise, if you look closely you can see the line going across the middle, our first lines of stitching went in brilliantly as did the second, then disaster struck, Denise pulled her gathered stitches out straight and the elastic broke, we don’t know if she had wound her bobbin too tight or the elastic wasn’t as strong as it should have been, but she needed to unpick and start again, of course because Denise used chalk, some of it had rubbed off, once we got the first line in and the rest went on easy

The next bit we did was to attach the back yoke to the the back bodice, Gertie suggests leaving the elastic in the bobbin and using it to gather the yoke, I’m not convinced, in fact I plain didn’t like it. I did my yoke first leaving with the elastic, I found that it was hard to keep the yoke piece from curling up and the gathers weren’t any more even than if i had used the two rows of stitching method. After completing mine I suggested that Denise should do it the regular way, in my opinion it looks better. Not enough to warrant unpicking it, but if i were to make this dress again i would gather with two rows of stitching pulled up rather than the using the shirring elastic.

I don’t have a picture of Denises yoke if I remember I’ll get one next week.

we stitched each pocket piece to it’s corresponding side piece,

by this time it was getting a little late 11 o’clock so we decided to call it a day.

Denise suggested that before we meet again we stitch up our side seams and shoulders so that we are all ready for the sleeves.

I agreed with this so packed up and went home.

The main things that I want to get to grips with this year is the two Dressmaking/cutting systems I acquired last year Lutterloh and Haslam.

I believe that if I can understand Haslam I will be in a position to create my own designs or at least understand how to alter patterns to fit better.

Lutterloh fascinates me, the patterns are easy to create it is just the putting them together I have problems with…the other thing that fascinates me about the 1940s patterns are the teeny tiny arms and necks these women apparently had.

Teeny tiny arms and neck isn’t an issue with the Haslam drafting System as it uses a lot more measurements than Lutterloh, though with Lutterloh only using two (bust and hip) it would be hard pressed to use less. Two of the extra measurements used by Haslam are the neck and elbow circumferences which will overcome the problem of my 2015 not teeny tiny arms and neck. 🙂

My friend and I are having a mini sewalong, if that is what you can call two people sewing the same pattern together.

Week one we decided on which pattern we wanted to do and traced and cut out the pattern pieces, we arranged to meet up the following week with our dresses cut out and ready to sew.

I am using this fabric

I think it is a light cotton, I bought on my trip to London in the summer.

and my friend is using this fabric 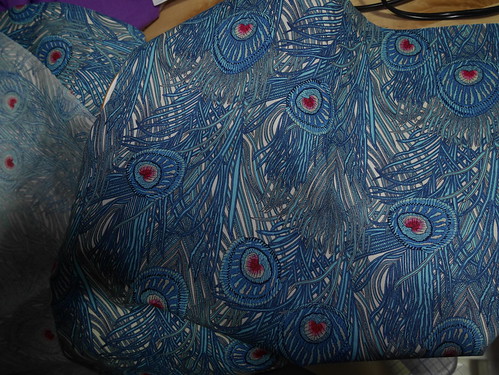 A cotton purchased from Kayes Textiles on London Road, Southend-on-Sea, my friend did have a slight issue as in the fact that although the pattern was advertised for 45 inch fabric, her skirt was too wide by about an inch, especially as she wanted it longer than the pattern.

Week two we managed to get the front pieces together, which for some reason took far longer than I thought it would, not helped by the pleats and the misleading diagrams in the book. The book seems to have the pleats going the opposite way to the photo of the dress, also after basting the pleats into the skirt there was half an inch extra fabric in my skirt but Denise’s was fine (can only assume a tracing issue on my part). 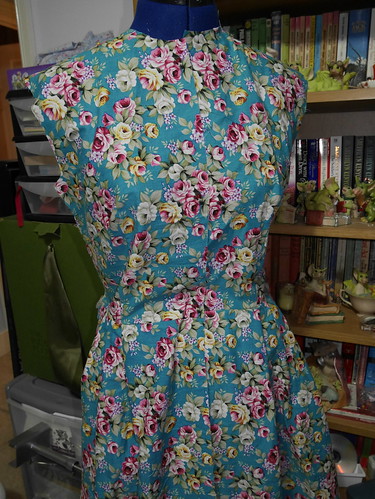 because of the fabric you can’t really see the pesky pleats but they are there.

next week we tackle shirring, collars and sleeves

This year I want it to be the year I get things done….I’ve made a start already.

I have a load of actual photos in Albums from Simons Mum which at some point I agreed to scan I think I have had them for a year or more. The beginning of this week I have started and hope to have at least one of the four Albums to take back by the end of this month.

I have had Gertie’s book for Better Sewing since it came out and I and a friend are going to sew something from it, The Shirtwaist Dress, we both have our patterns traced and cut out, I’m hoping to use this fabric…. 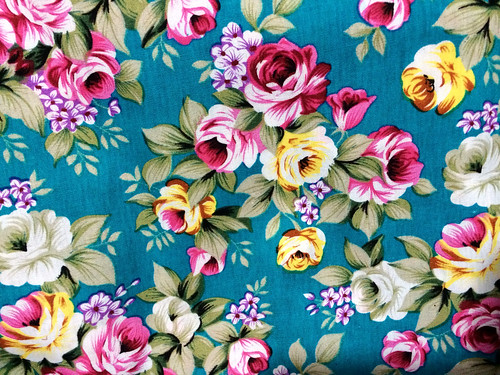 I also want to go through my started but unfinished projects, I am going to be ruthless if I can’t muster up the enthusiasm to finish them by the end of June then in the bin they go, in general we have too much stuff laying about and I want to get rid of it.

Which moves me onto my final thing, I want to be more discerning with what I spend my money on, I know I get carried away and I’ll buy something, I like it and buy a whole load of other stuff along the same lines, which is why I have cupboards full of jigsaw puzzles (damn you eBay) and vintage patterns (eBay and etsy)

I also want to continue with my blog and try to post more.

Oops where did December go?

Sorry, December seemed to have come and gone without a peep out of me, I’d like to say I was busy, but I can’t think of a single thing I did in December.

Wait a minute, I did make three skirts for my friend one straight one and two Maxi skirts, I don’t have any pictures so there isn’t a lot I can say about them,

The Maxi skirts I used a Lutterloh pattern in the end, I was going to make them from the Gabriola skirt pattern (sewaholic) but with the amount of alteration needed for the waist/ hip ratio I chickened out, so I used a pattern from my 1970s Lutterloh book and the equivalent of a FBA for the waist.

My friend is very happy with them and I can make as many as I want, I did have a problem finishing off the last one as my sewing machine decided it didn’t need correct tension or anything so I did the waist band by hand (it probably gave it a nicer finish anyway)

here is a photo of the detail on the waist band, which I am particularly proud of.

I hope to continue to do more consistent blogging this year, but we will have to wait and see