Depression is a common condition that can develop either gradually or overnight. Many people who have depression feel low most of the time. But this condition has many symptoms, which can make it difficult to recognise.

Depression is not a sign of personal failure or an inability to cope. Try not to blame yourself or feel guilty. It may not seem like it, but help is available. It is important to remember that depression is common, and that it can usually be treated successfully. The first step to feeling better is finding appropriate help. There are both medical and non-medical approaches to managing depression.

When you have been diagnosed with cancer, you may feel very low at times. This may be at the time of diagnosis, or during or after treatment. For some people, their low mood may continue or get worse, and they may need professional help or treatment.

Sometimes, it can be difficult to know whether you’re depressed or not. It may be other people who notice symptoms and suggest that you might need help.

Depression is a common condition that affects around 1 in 10 people (10%). It can be triggered by a variety of difficult events, including a cancer diagnosis or having treatment for cancer. However, it can also happen by chance or be related to other events that have nothing to do with cancer.

Symptoms of depression include:

These are just some of the symptoms of depression, but they will be different for each person. If you have other symptoms but think you may be depressed, talk to your doctor or nurse.

to be honest i don’t find the McMillian website particularly helpful, we had the welcome to your ‘tumour pack’ which was a lot of reading not much information.

lets address the symptoms of depression

Because I am having a problem with bottom halves I have bought itch to stitch sequoia cargo trousers and liana jeans, then of course I had to go to eBay and buy some cheap fabric to make them up in, I have also bought some beautiful purple jersey fabric for a love notions candence dress, I am starting to feel better, every night I think tomorrow, I’ll finish those two tops cut out on my table, I’ll take the photos of my sewing room – I’m planning to go to the knitting and stitching show this year the same as normal.

For some reason we thought, oh radiotherapy has finished we won’t have hospital appointments all week, wrong. Because the last week of radiotherapy/chemo my bone marrow stopped making Platelets (clotting) I have some beautiful purple bruises, this meant blood tests Monday /Thursday (check platelets) platelet transfusions Tuesday/Friday, finally my platelet count has started coming up, tomorrow’s blood test should confirm whether or not my marrow is now working, as long as the platelets come up from last week (no transfusion) hopefully the blood tests will no longer be needed.

I’m also having a MRI tomorrow, this is to confirm whether the left side weakness I am experiencing is being caused by swelling, which we are sure that is. The oncologist has upped my dexamethasone (steroid) for a week, left side weakness is resolving its self, we managed to take Charlie for a walk on the seafront today.

I wrote the first part of this post a week ago. My left side weakness is getting worse,the results of the mri is inconclusive, today is the first day in about 2 weeks that I’ve woken up with my brain thinking about working, the dexamethazone has been taken back down to 4 mg, my ankles and knees are swollen, still having regular blood tests no transfusions, this way we know if they are my platelets and not transfused platelets.

I have plans, next week Simon and I are going to blue water for shopping, gbk and Krispy cream donuts then the following week the knitting and stitching show at Olympia. I can’t wait.

Mum and I went to Olympia again this year, we went by coach, because of an accident on A13 it took 5hrs to get there, luckily for us we took a packed lunch, the ladies sitting next to  us weren’t as fortunate. The coach driver allowed us to stay until closing so we only missed out on about 30 minutes shopping.

This is just a quick post to show off my new stash.

From Bombay fabrics I bought this fabric 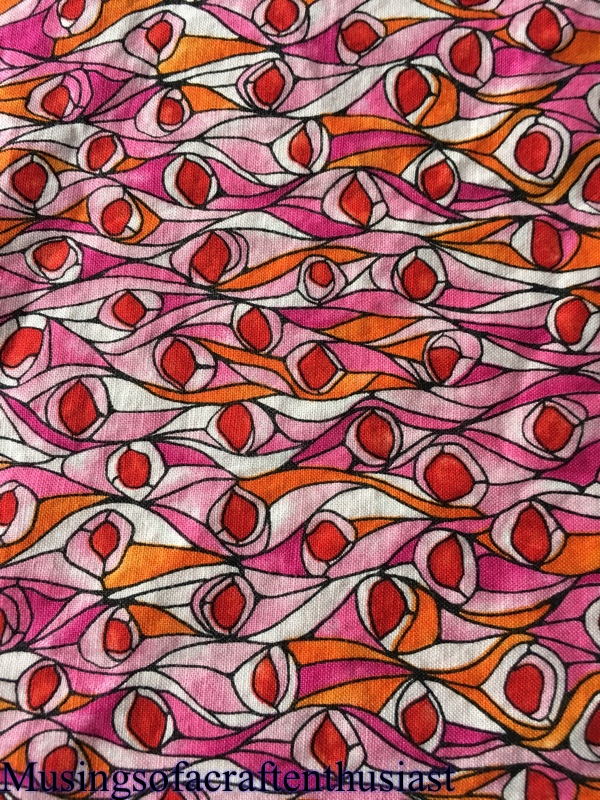 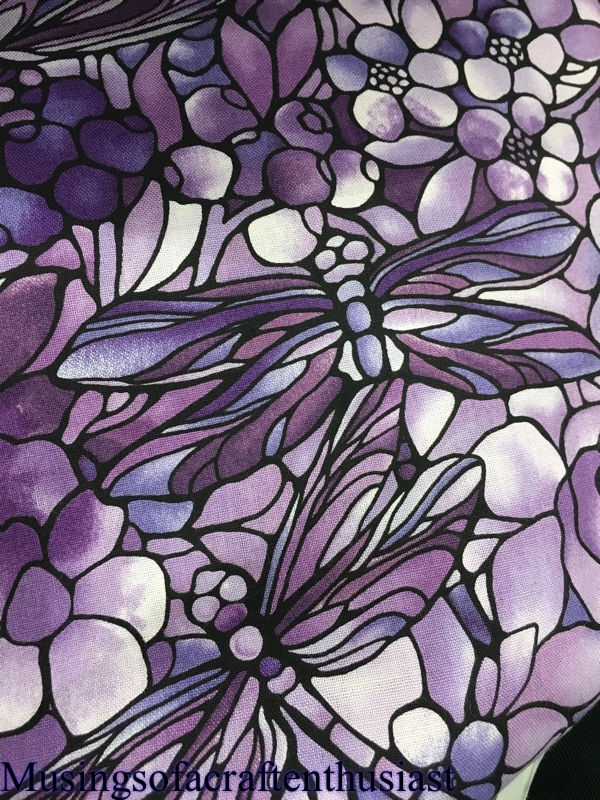 They are both clear cut from Fabric Freedom, I have an idea for a dress in the purple and probably a halter neck from the pink/orange. 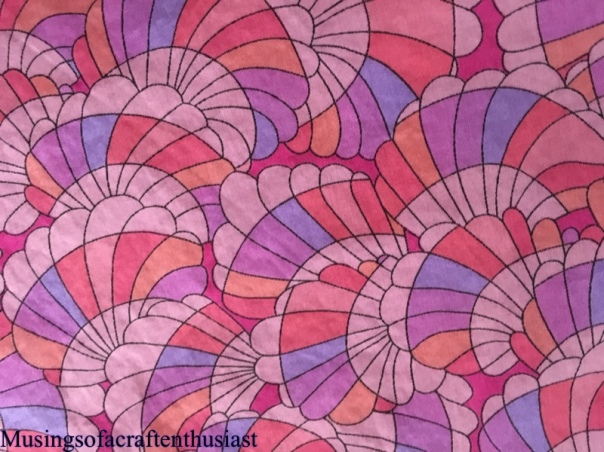 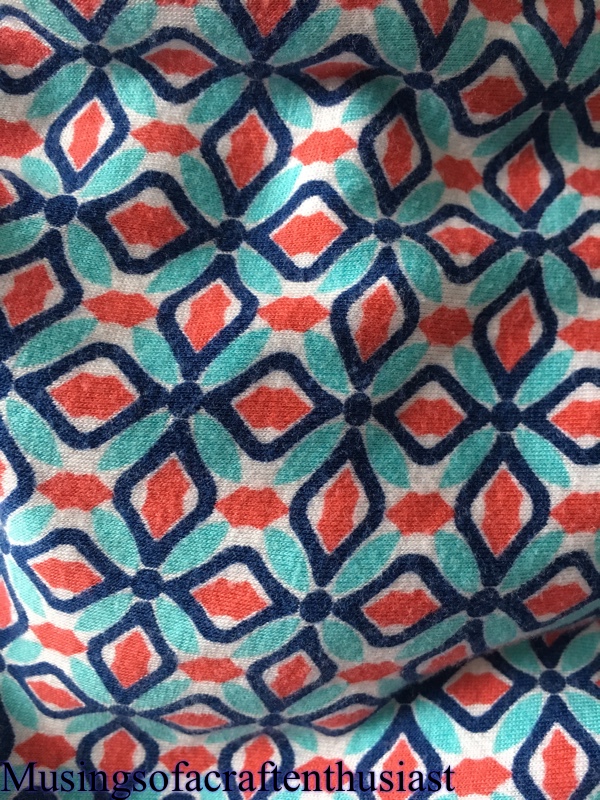 This is a beautiful Cotton Rayon Spandex blend, I had read about Girl Charlee in various blogs and I must admit I had thought of them as being a bit expensive, some of their fabric is expensive but this was £5 a meter (at show) they were friendly and very helpful. 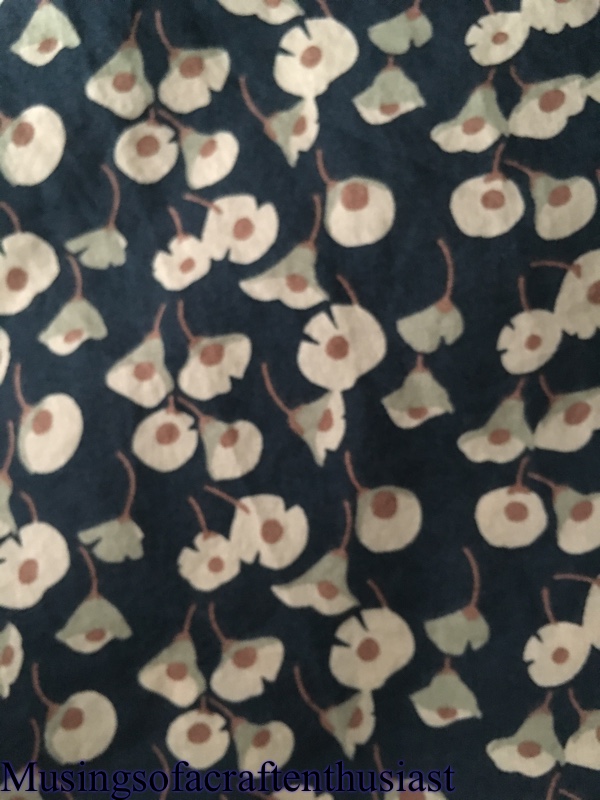 it feels like a cotton Lawn, it has that silky feel to it, I already have this in red but I’m too scared to cut in to it, this is going to be my test version. 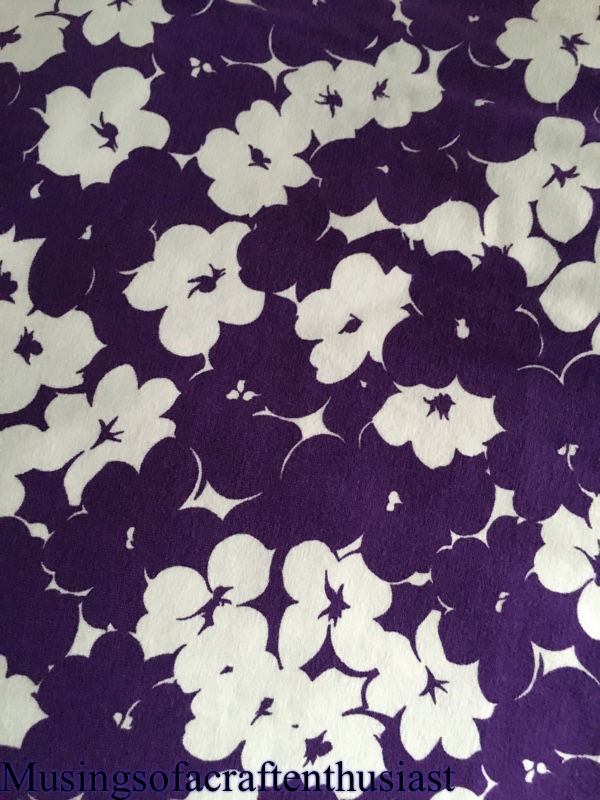 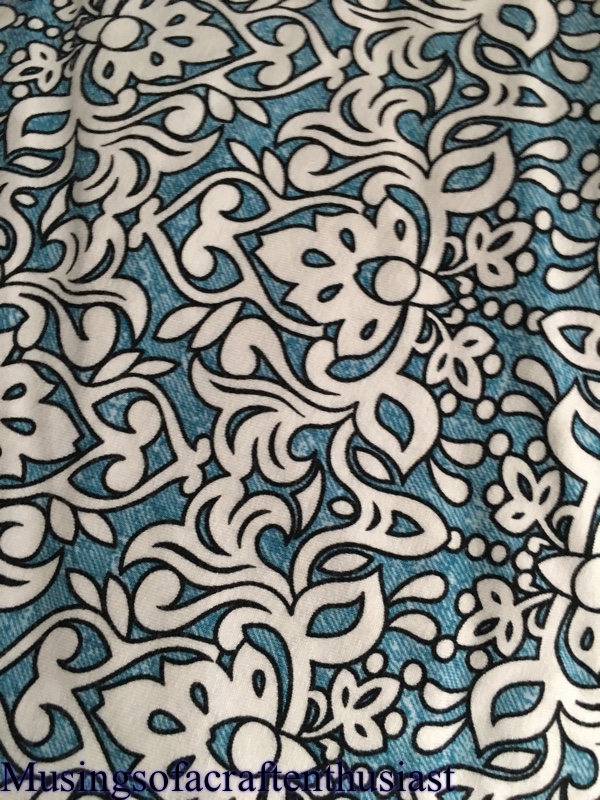 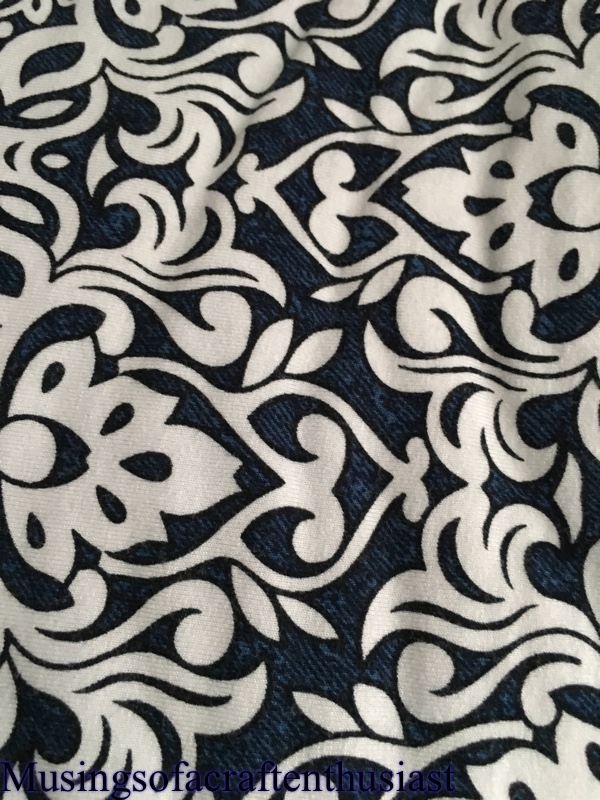 These three are all jersey fabric and to be honest if I hadn’t already fallen in love with the last two, I wouldn’t have bought anything from their stall. They seemed more interested in serving their regular customers, and even when I went back later on, with no other customers it was a struggle to get served. 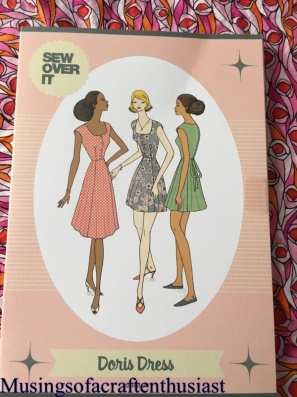 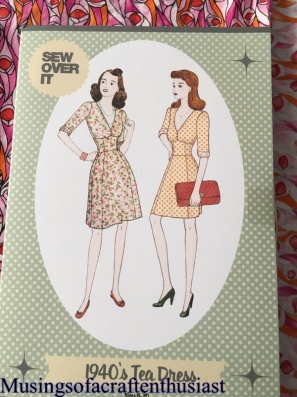 Unlike other years I have definite ideas about what I want to make with the fabric I bought. 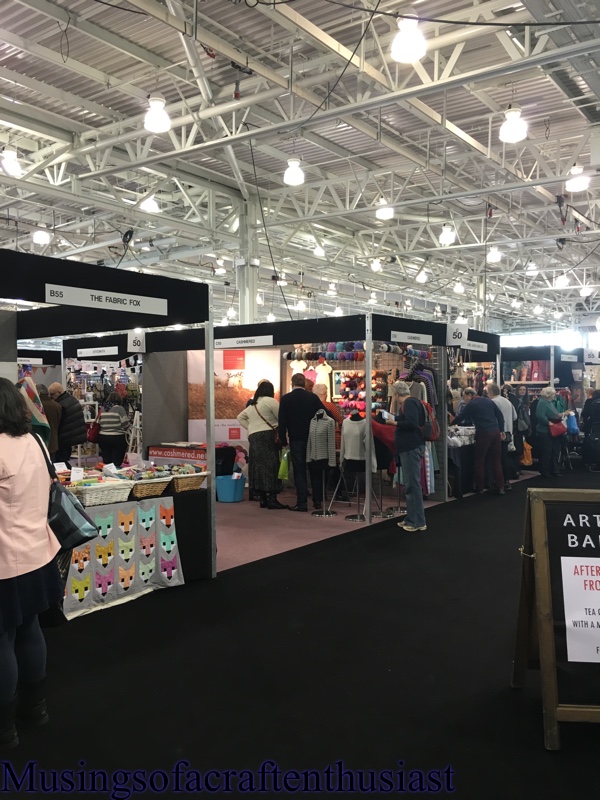 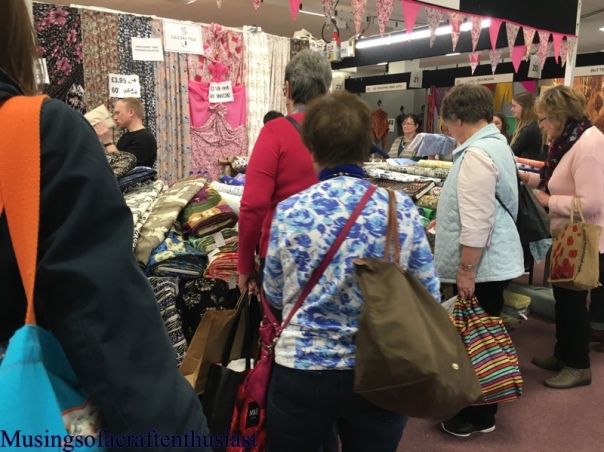 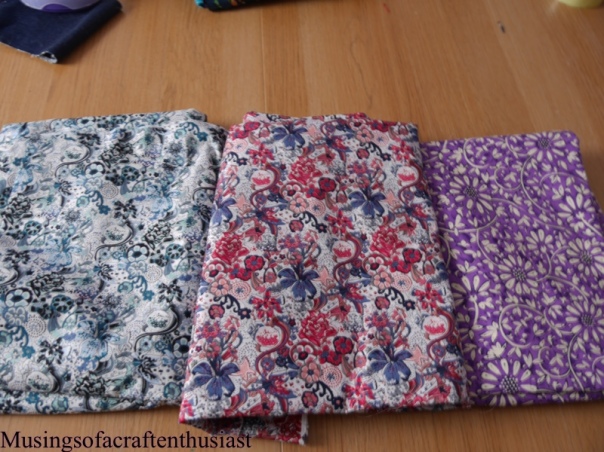 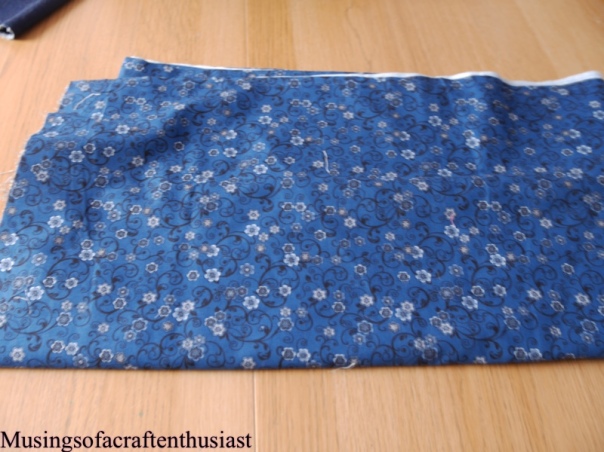 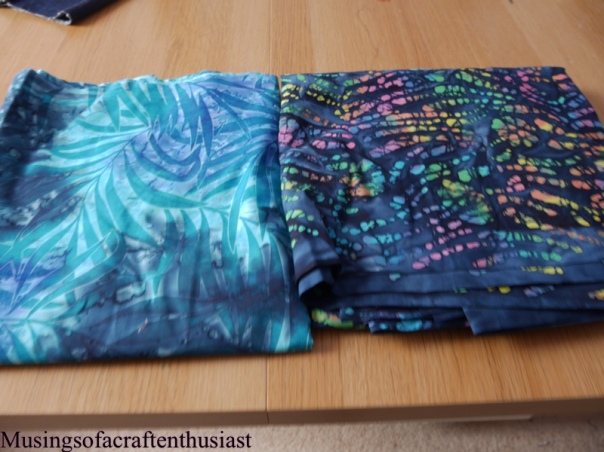 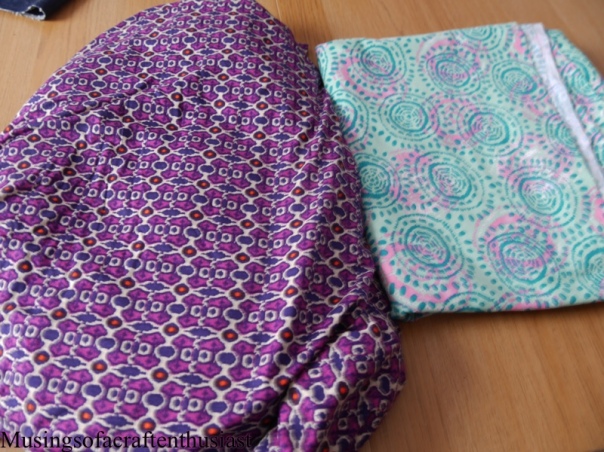 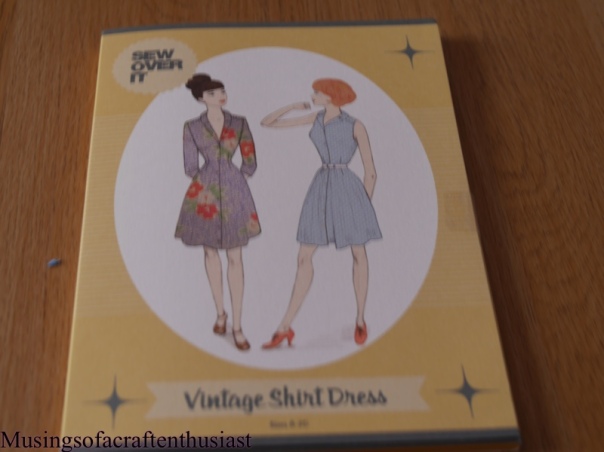 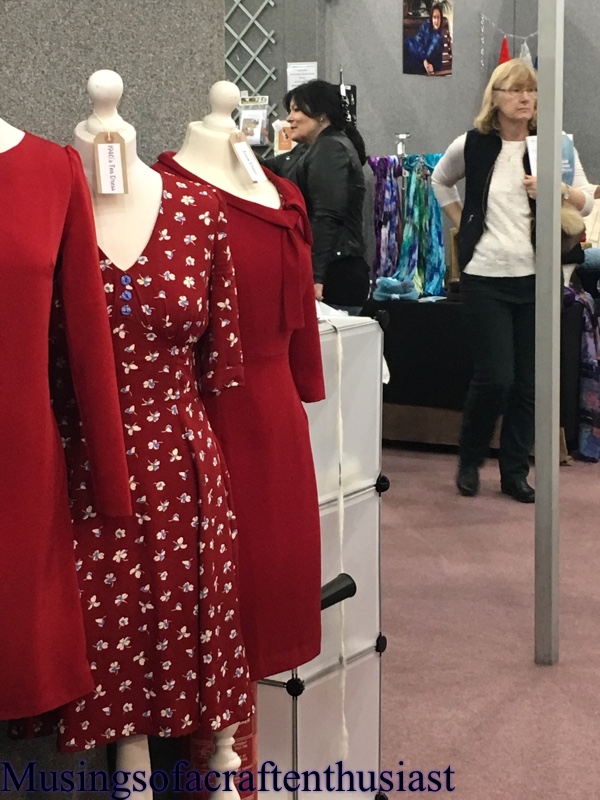 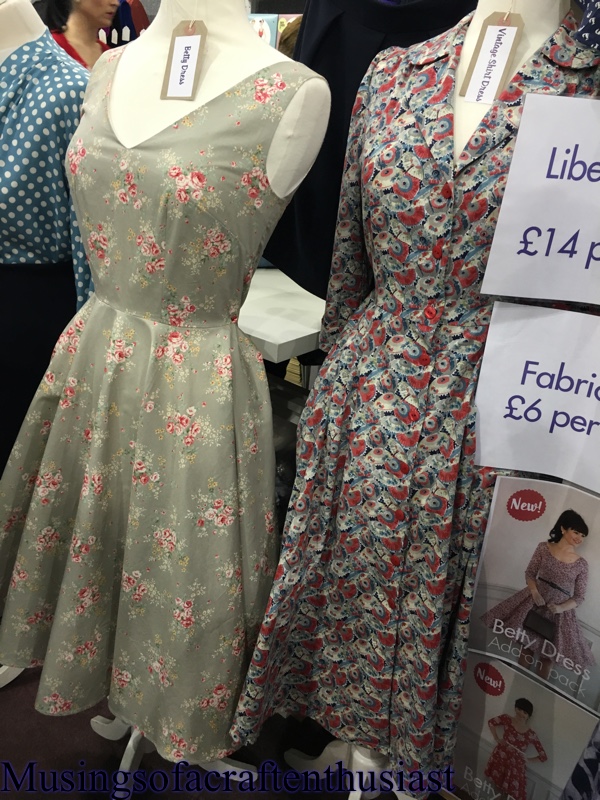