The last couple of dresses I have made have hung rather badly on my top half, and I’m fed up with it. It seems that, if there are clever drapey pleaty things going on I don’t have enough boobige to fill them out, which means that skirt lovely, top like a sack. one of the patterns is this

if anyone was wondering what happened to it I finished it, it didn’t fit I threw it in a corner. I have actually made it fit, sort of by taking an inch out of each side. that was just guess work and I’m not sure how much damage that has done to the arm sync.

Lets get back on track, I thought I’d sign up for a pattern making class, at least I’d have an idea where I was going wrong, I tried doing a small bust adjustment I think I went wrong some where as the pattern was practically the same size as when I started off. 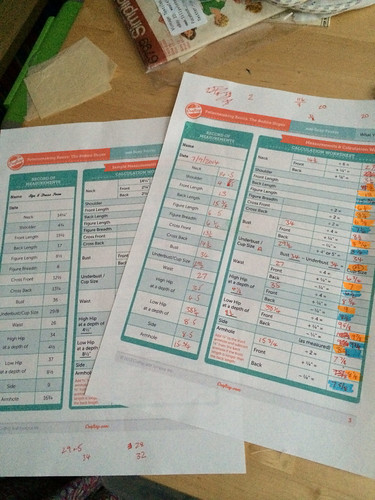 now I am half way through the transferring the measurements to paper, the hiding fairy has hidden my 2in by 18in ruler that I bought especially for the job, but while she was doing that she obviously took her eye off the ball and everything else turned up. 🙂

Posted on 15/09/2014, in Craftsy, Uncategorized and tagged Craftsy. Bookmark the permalink. Leave a comment.