I mentioned a couple of posts ago that I had made this skirt, well I have actually made two (almost).

A couple of weeks ago when the Summer was still sunny, I realised I didn’t have the skirt equivalent of Jeans to wear to dress down Friday, so Thursday evening I looked through my patterns and picked this one 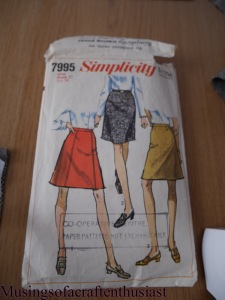 I wanted originally to do view 1 but when I opened the pattern envelope I didn’t have the pattern pieces. 😦
I really, really have to get in the habit of checking things like that when I get new patterns, to be fair I can’t remember where I got the pattern from, it could have said pieces missing on the auction.

So I decided on view 3, which was probably just as well as it is only three pieces and no top stitching, I had this piece of blue cotton I had bought from Kayes on a whim, I had been planning a play suit type thing for the holiday, I discovered that although the bust size was right on the pattern the hips were wrong so the playsuit didn’t materialise, which is probably just as well I’m having serious doubts on the convenience of going to the toilet while wearing one.

Back to the skirt it has four darts front and back, I was sneaky because i knew there wouldn’t be time to wash it first I used tailor tacks, which in general I hate I always get at least one or two that won’t stay in place. 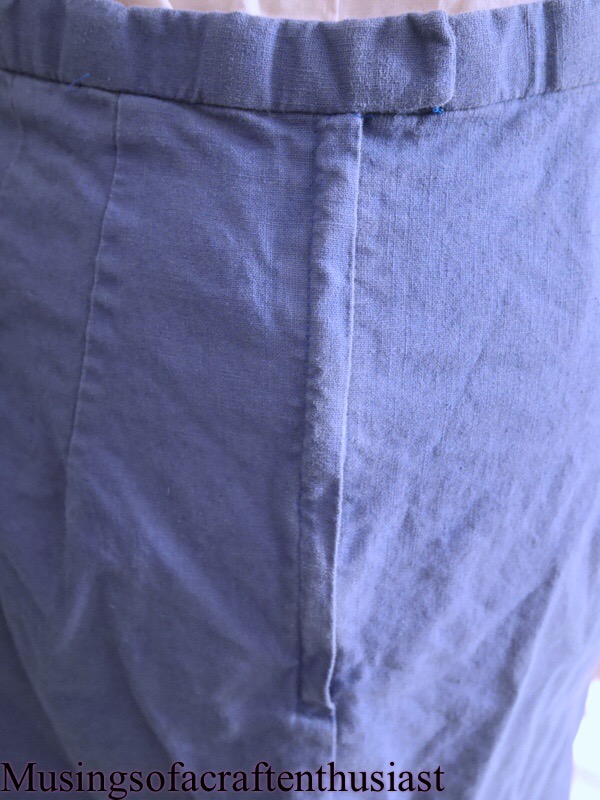 The zip went in first time and looks good, I think/hope that I’m getting the hang of those now. I used waistband facing for the waistband (obviously) which always comes in handy with the cutouts for folding, to save time I also machined the inside down, which i don’t always do because you get a much better finish hand stitching it. I machined a small hem on it and wore it down stairs to show Simon, we both agreed that it needed a lot off the bottom. infact I took practically 4 inches off it , Looking at the picture I’m not sure just how tall these models are but they ain’t 5ft 2 in.

all in all I think it took me a couple of hours to cut out and put together, so I’ve made another one.