I managed to get the front lying better in the second version than the first version, probably if I made the dress a few more times I would get the stitching right.

I can’t get the front to line up properly, the two fronts curve up under the bust, one side following back down the other, just in case you think it’s because, it’s too small across the chest, it didn’t matter what I did even just laying it on the bed with nothing in it it wouldn’t lay properly.

As you can see the back looks good, I think I probably should have taken an inch out of the skirt length as it is laying a bit low across the hips.

I might fiddle with the bodice size as I didn’t have much movement in the shoulder area, but for once I wasn’t swimming in fabric under the arms and across the bust. 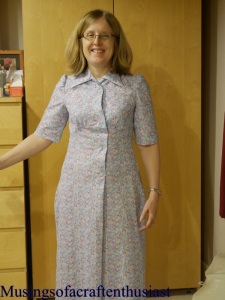 This picture shows the hip problem quite well.

The verdict is that I will make more dresses from the system, but will be more careful in my pattern choices. I was very impressed at how easily it was to create the pattern, practice will make the curves (sleeve head) better and I have noticed that the later the pattern the more information you are given for making up the garments.