← We are going to see Mickey Mouse….
Princess dresses, never too old? →

Hi, I’m not sure where march has gone, like a lot of other people I know, I have spent part of it ill, not flat on your back can’t move ill but generally sore throat, blocked nose can’t get up the enthusiasm to do any thing ill.

We, that is Simon and I have spent the last week at home on leave, we began our ‘holiday’ by visiting my Sister in Derbyshire, I think it was Simons excuse to drive his new car or an excuse to see my niece who turned two the beginning of the month.

It was a lovely weekend, we arrived late Friday night, and sat up talking for a couple of hours, then up early Saturday morning, my niece was a bit snuffly and cuddly, but apparently that is best for cuddles. we took her present with us, as soon as she saw The Gruffalo’s Child DVD she lost total interest in anything else and toddled off to the living room to put it on.

We went to Calke House for lunch, if you like stuffed animals it is a must see, there are lots of other things to see but I thought it particularly sad at the state the upper floors had been allowed to get into with peeling wallpaper and blown plaster, the weekend we went they had a lambing day, Simon was over the moon, apparently he loves lambing.

The rest of the week we have spent throwing things away and tiding up, Monday I threw out six bags of rubbish and Wednesday we took about 15 bags of stuff to the local charity shop. The upshot of this week is that we are both happier with the state of the house and I nearly have a new cutting table.

I’ve discovered that the older I get the less inclined keep stuff I am, a lot of the things that have been removed from the house this week a couple of years ago I was adamant that I couldn’t do with out them, now I can’t wait for them to go.

I can show you a pictures of my new cutting table which Simon hasn’t completed yet…all the component parts are here they just aren’t screwed together. While surfing the internet, I came across Horn Furniture, while it looks good it is hideously expensive. I also came across pictures of three Ikea Kallax units put together with a top and sometimes wheels on the bottom, after showing Simon he said “I can do that.”

The upshot is that I lost one chest of drawers and a computer desk and gained a cutting/ sewing table.

I’ve moved a single book shelf unit to sit with the others, it just clears the light switch, 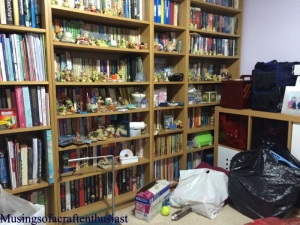 and moved my existing sewing table into the corner vacated by the computer desk and book case, 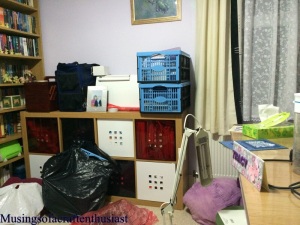 Although it has just as much furniture in it, the room now has more storage space and because it is all lower the room seems bigger.

Fluffy is making use of the extra carpet to put fur over a lot bigger area..

As you can see by the black and pink bags, I’m still tidying up.

I’m hoping to actually get some sewing done soon, it might just be a another Gerties Shirtwaist dress but it would be good to get something done.

What about you, are you less attached to things the older you get?

← We are going to see Mickey Mouse….
Princess dresses, never too old? →