First we have mauve dress, I’ve used this fabric a couple of times in different colourways. I love this dress, it is the third pattern I actually finished, however you can see by the front I wimped out. It should have 20 buttons and the corresponding button loops, it hasn’t it has a side zip instead. I discussed it with Ann we couldn’t decide what size buttons to use, we knew what they should look like, but not what they were called. We thought it should have those little pearl/mushroom type buttons but not where to get them from and as I said not the size also have you any idea how hard it is to match buttons to this fabric. 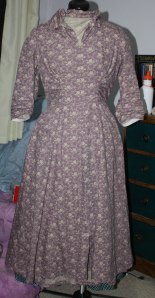 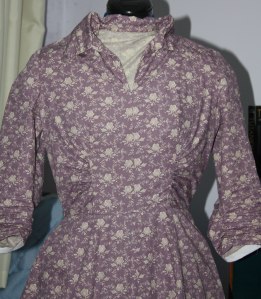 I liked this dress so much that I decided to make it again, this time with the button loops.
The Green Dress I found the buttons first, in a shop called Gina’s along the London Road, Gina has loads of buttons in boxes various prices and these small dark green buttons caught my eye I think they were 5p each bargain it took me about 5 minutes to find 21 of them (I like to get a spare). I when home straight on to eBay and found the fabric Cotton vintage type pattern very reasonable.

If you follow the instructions it goes together very easily, it is slightly too big up the sides but you can fix that by taking in the side seams 1/4 inch. The button loops were a nightmare it took me ages to get them turned in the right way, then working out how long to make them and the best way to attach them to the dress so they were equal distance apart before putting on the facing. it was worth it, I think this is one of my favourite dresses. 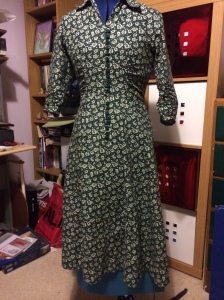 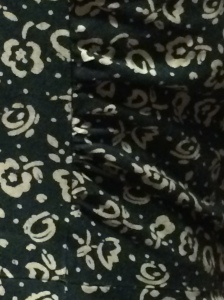 Technically the blue dress isn’t this pattern, the skirt is from a totally different pattern, the dress didn’t work in this fabric, it had a lightly gathered neck line which wouldn’t lie flat and sagged most awkwardly. I gave it up as a bad job and looked around for something else to do with the fabric, as most of my other pattern at this time were kimono sleeves I didn’t have the fabric for it. I think the end result looks good and I am pleased with the red buttons.

As you can see on the blue dress I still didn’t manage to get the button completely right, and where you can see a button missing at the waistline that is to accommodated the belt (not shown in this picture)

Also this dress is the second finish for March. It also looks a lot better on than it does pinned to my dressmakers dummy